13 Things To Do With Kids In Costa Rica

Costa Rica is perfect. It has every landscape imaginable. It's got African diasporic culture, indigenous culture, Latinidad, and a healthy expat community. It's incredibly biodiverse, and protective of its enviroment, but it has all the comforts of the gentrified palate--think bagels, tacos, and fancy coffees. In our six weeks traveling the country, we enjoyed a freedom from crime and harassment (both state-sponsored and otherwise), that we often don't experience in our own urban, 'First World' centers. Bugs aside (oh so many bugs!!), Costa Rica is perfect. This is by no means an exhaustive list of everything you can do with kids, but what we hope to get across in this post, is that almost everywhere you go in Costa Rica, you'll find joy.

1. Explore rainy season. Costa Rica is expensive, especially when compared with the rest of Central America. Don’t go expecting full meals for pennies at any time of year. But having gone in both seasons we can safely say, you can find accommodations at more reasonable prices during rainy season. The biggest plus is the built in down time during the day. We found that exploring by morning, then taking advantage of the rainy afternoons to relax provided a perfect natural rhythm for family travel. Then there’s the added bonus of things not being overly crowded. (There were always boogie boards left to rent at the beach, no matter the time of day).

2. Do a chocolate tour. Costa Rica has, hands down, the best chocolate in the region. Colombian chocolate ain’t nothing to sneeze at, but we’ve found that Costa Rican chocolate--even more than the coffee--is where it’s at. We chose a tour of a small chocolate farm on Air BnB on the Caribbean coast, run by an American expat and former Waldorf educator. She knew exactly how to answer the two thousand questions our children asked with grace under the fire of constant interruption, and kept it very hands on. The chocolate we made there was the best we tasted, and that’s saying something because almost all of the chocolate we ate in our six weeks in Costa Rica was delicious. The kids also got to tour the rest of the farm, and play with baby chickens. It was one our best days traveling.

3. Visit a turtle beach. Costa Rica has 6 of the 7 species of sea turtles. They work tirelessly to preserve the habitat to give these nearly endangered species the best chances for survival.  And if you’re worried about my kids learning science, don’t. They watched a sea turtle lay eggs on the Caribbean coast, then watched baby sea turtles hatch on the Pacific. They literally witnessed a life cycle. We’d have been ecstatic just seeing one part.

4. Carnival! Way more relaxed and navigable than any other carnivals in the Caribbean (I imagine, I’ve not been to all!) but I cannot imagine tackling, for instance, Rio de Janiero carnival with children in tow. Limón carnival has a cute festival set up by the water that runs the entire week, featuring rides, music, and some of the best jerk chicken outside of Jamaica. And Brooklyn. Ok, and Brixton. The actual parade is so relaxed that the children play together in the streets between bands. Limón carnival is a best case version of getting all the rhythm with none of the overcrowded, potentially crime-ridden blues.

5. Stay in a treehouse, or Caribbean-style house. This was our most memorable and our most challenging. All common areas were outside. The kitchen. The living rooms. Only the bedrooms, mercifully, had walls and ceilings…basically. The wall’s wooden slats had significant gaps in them. We battled bugs constantly. But by the end of our stay there, we came to an acceptance of them. We share the earth. We wouldn't be here without them. They must exist. I watched my little one go from screaming in the presence of the tiniest ants, to kneeling down close, watching in awe as they work.

6. Mangrove tour. Mangroves are natural barriers to storms and hurricanes, performing the very important function of protecting the land from destruction wrought by winds and rains. But also they are home to thousands and animals. We enjoyed getting out on the boat, even in rainy season!—early in the morning to see what animals would appear to our eyes and ears. We only heard the howlers in the wood and bamboo canopy. The caiman, we saw snapping his jaws closed at the waters surface before disappearing into the murky waters.

7. Sloth Sanctuary. I was on the fence about this one, ethical animal tourism and all that, but we learned so much about sloths, their anatomy, and the biggest threats to their well-being: humans. While we generally shy away from animal tourism, it's also clear that at times human intervention is necessary, even if only to right human wrongs. We watched various concerned organizations engage in efforts to keep Costa Rica ever safer for its wildlife. For example, covering electrical lines so that sloths and monkeys can cross them without electrocuting themselves, or rescuing animals from poachers and traders. Whenever our money can contribute to such efforts AND delight our children (which this trip definitely did!) it's a win-win.

8. Boogie boarding. Everyone takes a surf lesson for the ‘Gram when in Costa Rica. Cute. No, really, the pics are cute. And unless you’re doing multiple lessons over and extended period of time, you’re not doing much other than a photo op.

9. Catch a sunset. They are among the most beautiful I’ve seen. You don’t need a special tour or spot. Just an open evening and couple snacks and drinks. But be quick, the sun sets so fast, the moment doesn’t last longer than it takes to appreciate it.

10. Drive from pacific to caribbean. This national route from San Jose (the capital) and Limón (the biggest city on the Caribbean coast) can be grueling. With the country's trucking industry nestled in the villages between the two cities, a 4-hour drive can take up to 7 hours. However, if you travel at strategic times of the day, it's a route that showcases the country's lush varied landscapes to perfection. Pack ample snacks, blast your family's favorite tunes, and break the trip up into two parts--Limón to San Jose, then San Jose to whatever city on the Pacific coast strikes your fancy--and you'll return home feeling like you left no Costa Rican stone unturned.

11. Hike! Over 25% of Costa Rica is protected. This includes 28 national parks, and acres upon acres of hike-able trails. Many, like the beautiful Cahuita National Park, only require a small fee for entry, and you can spend as much or as little time as you’d like exploring. We did not hire a guide for this hike, but we should have. It isn’t so easy to see animals in the jungle without a trained eye, and that was only our second jungle hike. These days, the kids are spotting animals the guides don’t see. Experiment with longer and more difficult hikes as you build stamina; it’s a great way to set and meet goals as a family. We started with 30 minute hikes, and made it through 4 hour long hikes with zero complaints.

12. Visit Bri Bri territory. The indigenous people of central Costa Rica were never colonized. That’s reason enough to venture into the interior. They actually kicked the Spanish out because they didn’t like how they came in and started planting random cacao trees everywhere. We didn’t do a full or formal tour of the territory. Our Airbnb host in Punta Uva offered to take us to a waterfall just on the edge of it. We could feel the shift in energy in just the few hours we spent there. There are some chocolate and tours offered in the Bri Bri region, as well as another, bigger, more beautiful waterfall. Those are definitely on our agenda for our next trip to Costa Rica. 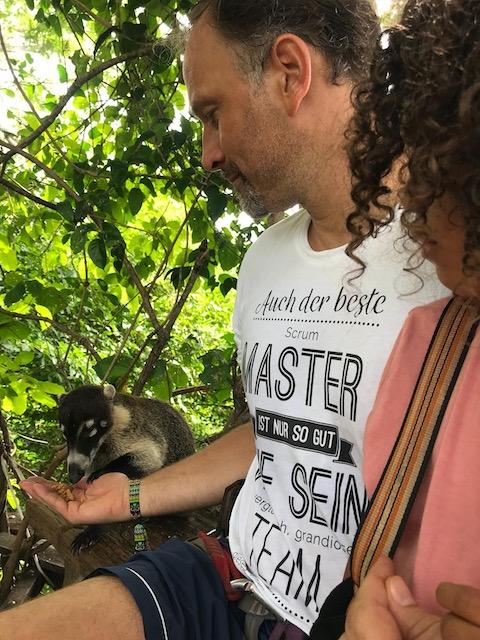 13. Just chill tf out!! The most meaningful experiences we’ve had in Costa Rica, especially with wildlife, have happened as a result of just hanging out and doing ‘normal’ things. We met a family of monkeys crossing electrical lines to find their next home, while getting smoothies; toucans while bathing in the hot springs; a sloth in a tree on the way from the beach. Coatis everywhere, including this family friendly guy who hangs out by station 6 of our ziplining tour. Ziplining is technically not chilling out anywhere else on earth, but Costa Rica!