9 Things No One Tells You About Traveling With Kids

We, at Travelkin, have traveled extensively as individuals, a couple, and now, as a family of four. Family travel is as rewarding as any of those other phases, if not more. Yes, it is hard, but parenting is hard no matter where or how you do it. Here are the ups, downs, and in-betweens of traveling with little ones, and few of the myths, debunked. 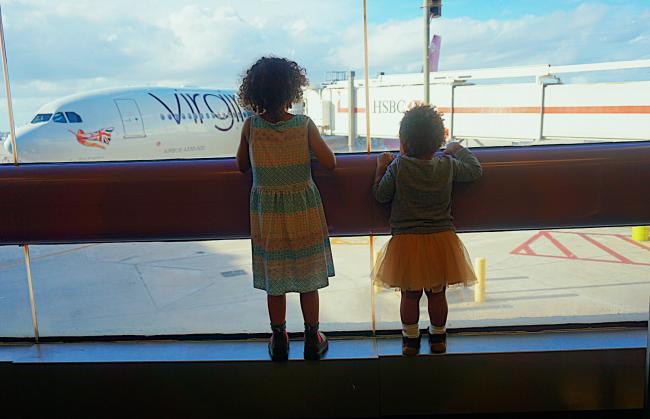 Kids bring out the best in people. Maybe it’s because no one can resist a cute kid. Maybe they just want to head any tantrums or disturbing behaviour off at the pass. I like to think that children’s joy can penetrate even the most professional veneer. It’s amazing to see staff at Michelin-starred restaurants chucking a child’s chin with one hand as they pass by your table with a loaded tray in the other.

Yet other good souls just want to make sure you're taking proper care of those precious kids. You've got those poor things so far from home, traveling these shady places and people just want to know they’re ok. You get random upgrades. Unsolicited snacks and advice, but as long as it’s meant well…

It can be expensive

Family travel is never going to be cheaper than you hopping on a plane by yourself. It doesn’t matter how many flash sales you catch, or error fares you score. Some hotels will charge extra for children. That, or insist you book an extra room for even the smallest of children. (Who among us hasn’t had to call a hotel to let them know that your 3 year old would not sleep in a strange room alone?) Some big chain hotels even try to charge upwards of 25 US dollars per child for a buffet breakfast. Our kids literally eat a bunch of strawberries and a piece of toast for breakfast, so that’s a no.

Having said all this, travel costs can amount to less than what you spend monthly on some expenses at home. (Of course depending on where and how you live.) If you live in New York City, for example, quality food, almost anywhere in the world, will be cheaper. And with limited flying, meticulous planning, and beaucoup hacks, your family can travel long term using about as much money as you would at home. 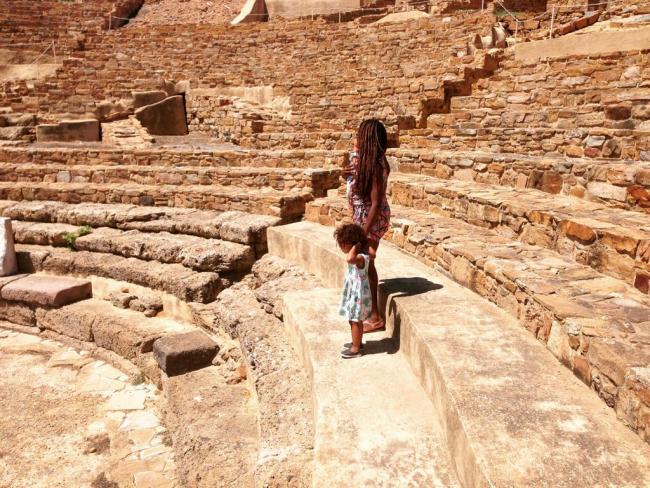 First, no one is suggesting you take your children to a war zone.

But if we could count how many times we heard, “Vietnam isn’t for kids” in the week before we went, we’d be able to buy pho for the whole family for a month. It was like people were picturing a war torn country of dirt and poverty more than 40 years after the war’s end. People who had never visited were too comfortable commenting on what it is like. We went anyway, and found an incredibly family friendly vibe. No, there aren’t playgrounds or Chuck E. Cheese's on every corner. But in Hanoi, for example, the crazy traffic is halted in the center weekends, and the streets are turned into a race track, with pimped out little vehicles for the kids to bump around in. The Vietnam War Museum has a light, airy, fully outfitted, beautiful kids library/playroom, equipped with staff to babysit while you peruse the endless photos of American & French atrocities. Family friendly is in the eye of the traveller.

A tantrum under a palm tree is better than a tantrum on the local city bus.

Years ago as a young traveler, I almost drowned in a white water rafting accident. Our raft turned upside down into the middle of a whirlpool. I was stuck under the boat, which I tried to get out from under in the way they teach you during the introduction course, but of course the raft just kept moving in a circle because whirlpool. I started to panic. Then the raft popped out of the vortex. I followed a few seconds later. I grabbed onto a little branch as the river rushed me along so quickly I could barely get myself together to swim. I sat on a little rock on the edge of the river and waited to be rescued. I got right back in the next day. Why? As the woman who also survived the whirlpool with me would say in the aftermath:

“Well. I’d rather die doing something cool in Costa Rica than get hit by a bus in Passaic, New Jersey’.

I've never been to Passaic, (and my apologies if you're reading this from that no doubt great town!), but motherhood has inspired me to interpret this sentiment into something a little less macabre. It's easier to access your most expansive self, higher self, your calm-in-the-face-of-a-screaming-toddler self, in a bikini. You're already in a fresh new space that demands presence. It's easier to stay in the moment and not fall back on programmed negative reactions while navigating new experiences. You're already exactly in the mental space needed to respond with grace, creativity, and mindfulness. Or to offer that screamer a gelato or whatever local treat is available. You’re on vacay, why not? 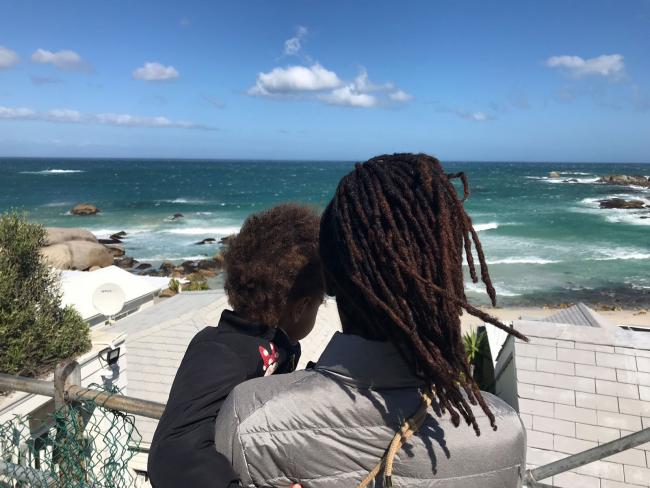 It doesn’t matter where you go.

The kids (at least the young ones) don’t care. They just need you. You are their home and their stability.

Your kids will remember

In Euro-American culture, we conflate remembering with recalling, or reciting facts, when real memory manifests in so many ways. People have asked our kids, “What did you see in South Africa?” which is a valid question, but when they cannot immediately recite or recall, people look at us like we've wasted our money. In quieter moments, we’ll be flipping through a magazine and my 2-year old can pick out places we’ve been, without being interrogated or having her memory jogged. Their pretend play has been enriched by the invention of words and languages, so influenced they've been by foreign tongues. When it comes to kids, memory is so much more than total recall. 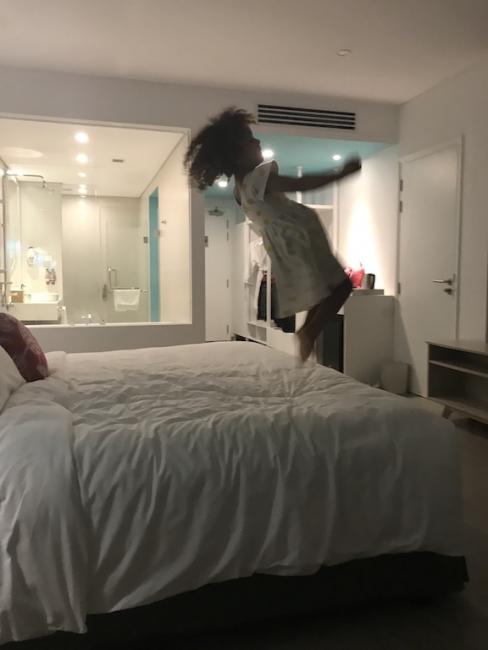 Room Service is your friend

After a day of exploring, our children don’t always have the bandwidth to just sit and eat like civilised human beings. And when we are not staying in an Air BnB in our travels, where this is possible, we do turn to room service. It has saved your dinner many a time. Yes. Yours. You, celebrating, or going to dinner to have that talk, or just wanting to have a quiet evening by yourself without rambunctious kids flitting around the dining room.

They are many times too wired to be engaged by introspective activities like drawing in journals or having books read to them. The jitters don’t even allow for cuddling and conversation. In these cases, we keep our over-tired tots in-room, and order up. It’s a luxury and a privilege, no doubt. It means we always need to have a bit of extra money on hand. It means we have to be careful not to spend the day’s allotment on souvenirs or expensive eateries, because we may need to spend it on buying peace for dinner. For ourselves, the locals, and more often than not, our fellow travellers.

You don’t need lots of toys

Our children have a thing for building altars. At the beach, even on safari in the middle of the savannah, they grab the biggest stones for the base, then set the prettiest little shells and stones on top, in formations they agree on and in patterns that only make sense to them. It is the most beautiful, peaceful play imaginable. All of a sudden, the sand toys we replace every few months at home are not essentials. They make do with the beauty around them. We also don’t travel with a lot because we like to leave room for them to purchase a special book or stuffed animal as a reminder of places we’ve been. 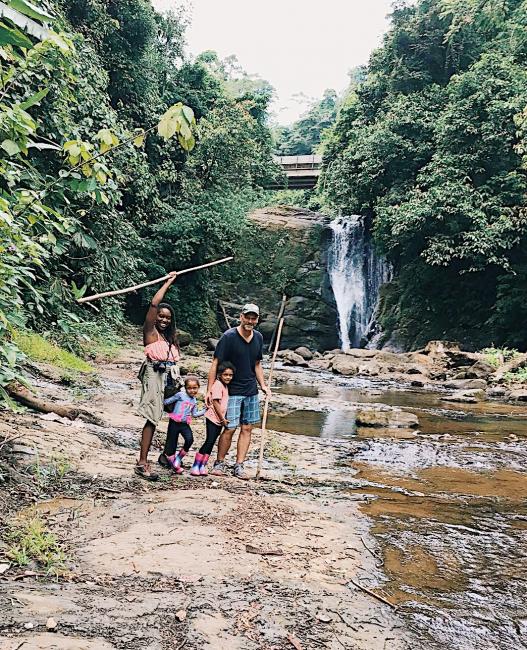 You don’t need lots of gear

Family travel marketing is more often than not about marketing stuff. Things. Gear that promises to make it easier to travel. A suitcase with a seat on it. A shoulder-carry contraption especially for dads. A stroller you can open with your pinky, leaving four fingers free to hold your collapsable reusable super green water bottle with collapsable reusable super metal/bamboo-mix straw.

Travel with children, if you do it enough, will require ever fewer gadgets. It’s just like having kids. With the birth of the first kid comes a list of must-haves 10 Amazon pages long. Let’s just say we recognised the sheer superfluity of wipe warmers, swaddle cloths, and diaper genies by the time our second child was born. It saved time, space, and simplified our lives.

We've learned that our baby carrier is really the only travel gear that’s gotten consistent use. It’s easy, long lasting, and reliable. Many folks swear by a good travel stroller, and that’s fair enough. But beyond that, most everything else has either had a short shelf-life, or just been one more thing to keep track of. Keeping up with the kiddos is enough.