…although the dolphins are pretty darn spectacular! But in the aftermath of our half day tour with Akaroa Dolphins, I was left intrigued and enchanted by everything about the environment these special animals call home.

I found myself daydreaming about the Maori sailing the Pacific in the year 1300; navigating the jagged network of bays towards a rocky nook ascending the collapsed volcano crater. That nook was the site of the first Maori settlement in the town that would become Akaroa. They called it Onuku, which means ‘the place of comings and goings’.

Onuku is still there. From the water, a stark white church dominates the landscape. But on a winding drive in, from the centre of Akaroa, a French flag and an old Māori burial ground welcome you, completing the picture of how the region came to be. 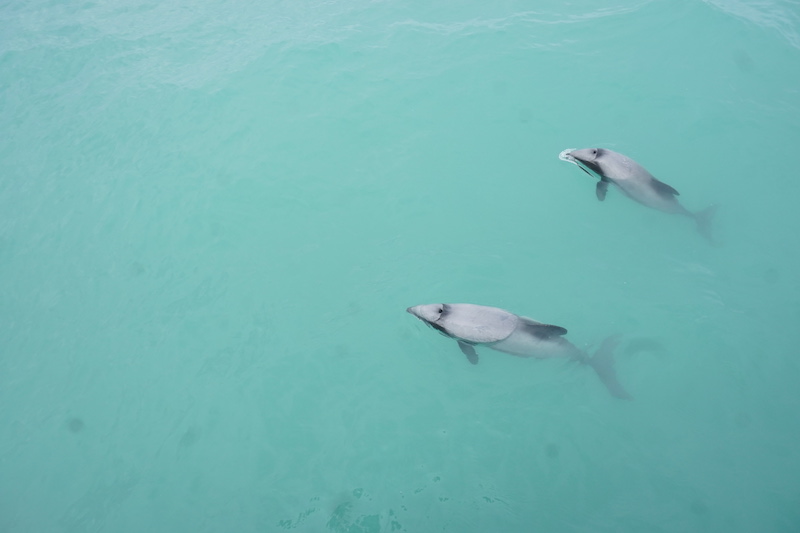 A day trip with Akaroa Dolphins takes you on a boat tour out into those waters to see Hector’s Dolphins—the smallest and rarest dolphins in the world—in their natural habitat. These animals are friendly show offs that love to play. They are now a protected species; part of the bay is a marine reserve, where there’s no fishing and commercial tour boats are restricted to a handful of outings per day. 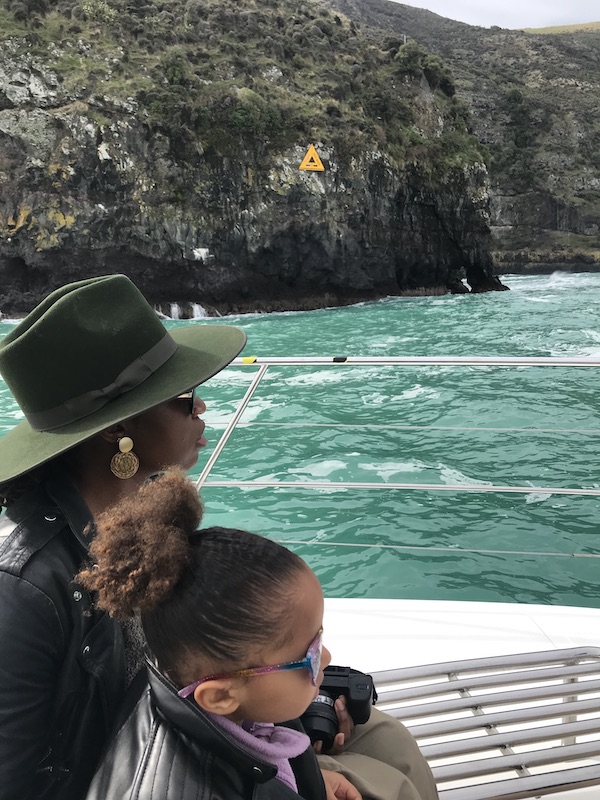 While the dolphins are the namesake, this is a tour of so much more. Akaroa is as rich in sea life as it is in culture and history. It’s fitting those stories are told on the water—the place of comings and goings. 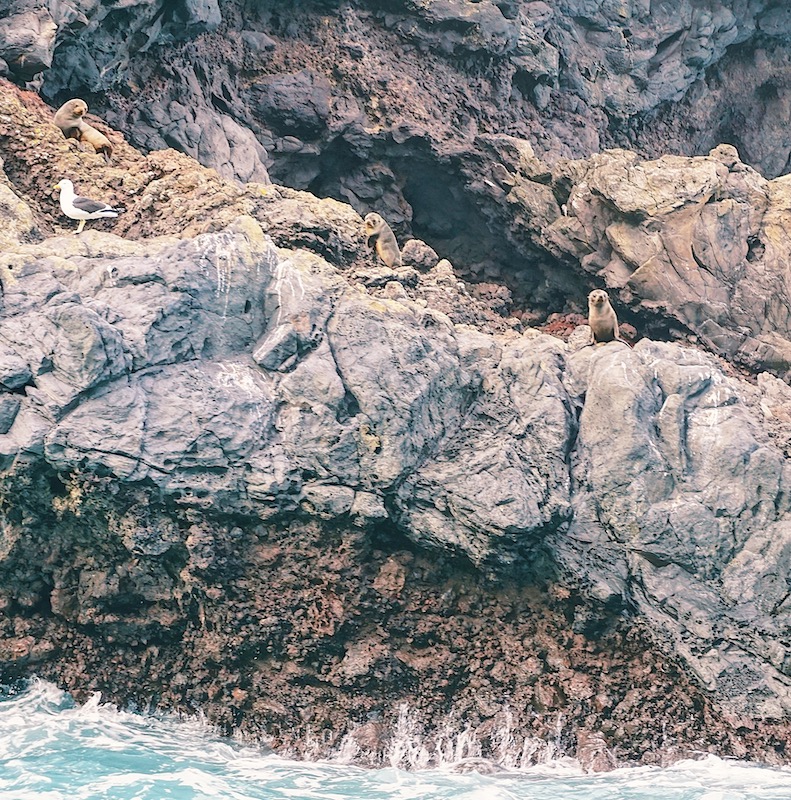 The captain of the Akaroa Dolphins ship is the agile storyteller here, connecting the dots between the history and the ecosystems that sustain both human and wildlife, and how they’ve evolved over the centuries.

Through his musings we learned about the effect fisheries in the inner bay have on the outer bay, and how and why the population of penguins has fluctuated over the years. We learned that the Maori ate leaves from the tops of palm trees that should not be growing in the mountain range, exactly how the once volcano collapsed in, and where the peak now lies, which is also where North Island Māori laid in wait to attack South Island tribes.

In addition to Hector’s Dolphins, these waters are home to various sea birds, seals, and penguins. Though the dolphins are the star of the show, seal pups stretching and waving from the rocks come in a very close second. 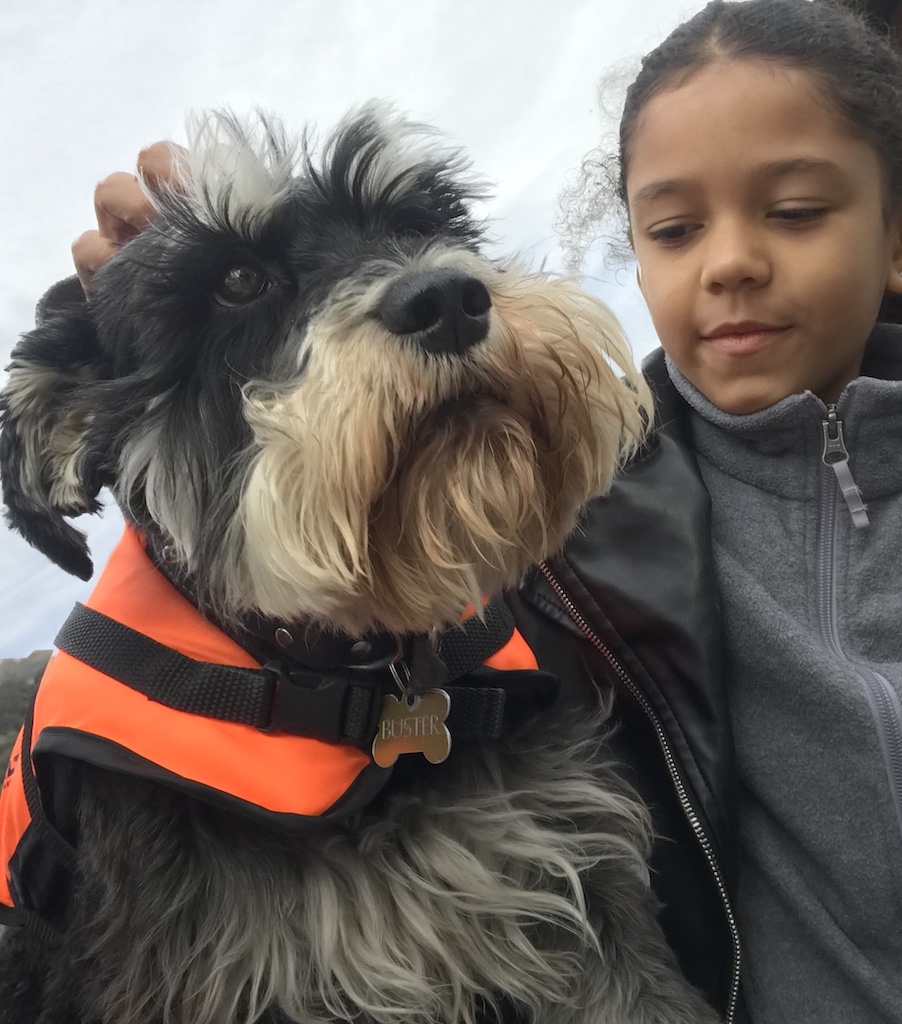 And both must compete with the fleet of impossibly cute dogs that sail along on each outing. Buster, a friendly, vivacious schnauzer terrier who loves the water so much he must wear a life jacket, accompanied our tour. He not only alerted us when there were dolphins nearby, he came to sit next to me while I hung out nauseous in the back of the boat. He lay contentedly between our daughters for pets and snuggles on the way back to the harbour.

Note that in the winter the waters tend to be considerably rougher. Pop a dramamine if you have issues with motion sickness.

Also, fewer dolphins are out in lower temps because they have to work harder to find food. They are too busy hunting to play. In the summer abundance, the dolphins get theatrical, making the Sea World’s of the world look insignificant. The biggest lesson we learned is that you don’t have to train dolphins to interact. It’s in their nature! 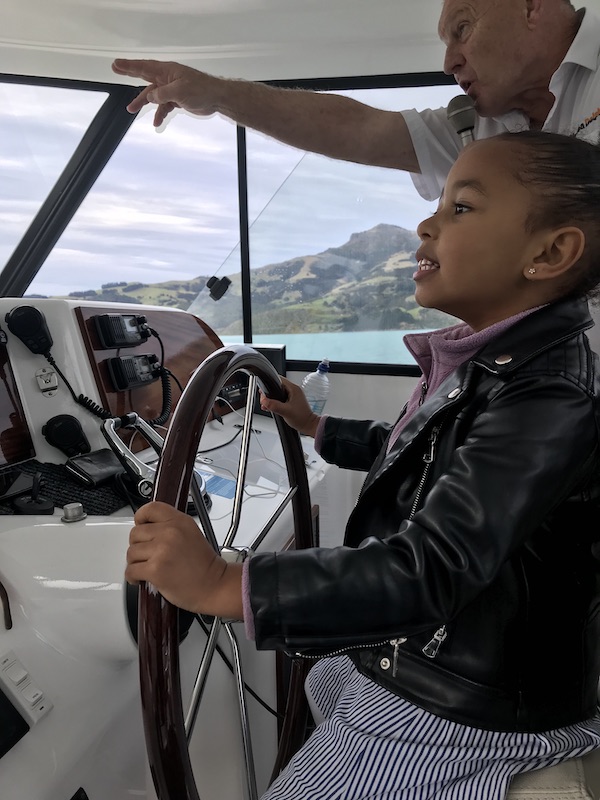 Book a tour with Akaroa Dolphins online, or in Akaroa at their shop by the harbour.

A huge thank you to Akaroa Dolphins for hosting us on this exciting educational tour!