What You Should Know About SANTA MARTA (Colombia) 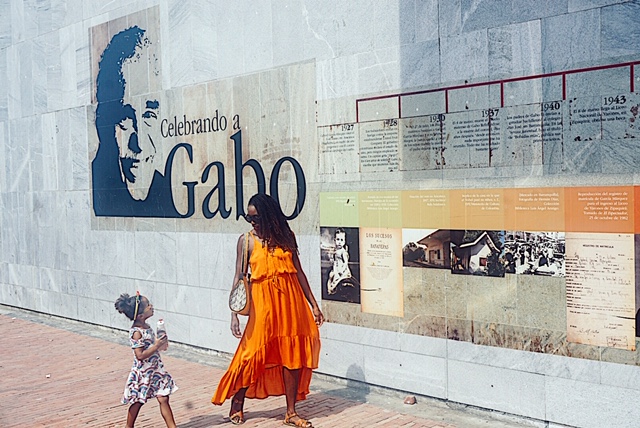 Gabriel Garcia Marquez was born about an hour and half outside of Santa Marta, the oldest continuosly inhabited city in South America. His parents were married in the local church (one of the oldest in South America) just a few blocks from this library erected in his honour. A timeline of his life is etched into the outer walls.

The Gold Museum, just across the street, tells the stories of the region’s first inhabitants, the Tairona, through their beliefs, artistry, and innovations with gold, silver, and bronze. The glass encasing the earrings worn by the chiefs reflects he style of urban queens in hoods the world over.

The great Liberator, Simon Bolívar lived his final days in this building, also known as La Aduana. He didn't intend to die here, he just got too sick to board the boat to Spain to visit doctors. I like to think that was kismet's way of staying in step with his soul's earthy mission. Bolívar was born in Venezuela, and led the independence of Venzuela, Bolivia, Colombia, Ecuador, Peru and Panama from Spanish rule. Bolivia is named after him. As early as the 16th century, he was the first to declare that anyone born in Colombia should be free. This included Africans.

Access to this history is free of charge for all.

Everyone we spoke to said that Santa Marta is incredibly beautiful: a beach town and playground for Colombian vacationers. The taxi driver on the way to our hotel pointed out a gated community of slick all white buildings he called, ‘the Miami of Santa Marta’. It’d have been way more helpful if he could have pointed us towards a palenque (towns, during slavery times, where Black people lived free).